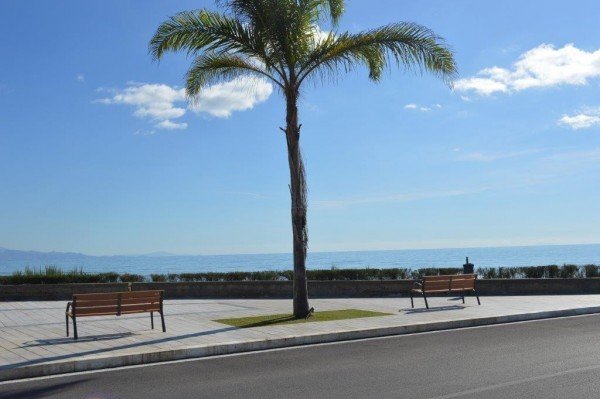 Why should you be interested in the twin cities of Anzio and Nettuno? Not exactly top of the guide book listings for Italy. Do their names ring some sort of a bell in the back of your minds – yes, you—of the age group who still studies history, or vaguely remembers maybe your parents talking about world war II, mentioning long ago times. And you, millenials, out there who enjoy a Sunday drive south of Rome, taking in a bit of history, but mostly out there searching for that great restaurant and bar your friend told you about (but why isn’t it showing on WAZE?) , and you, real estate tourists, who can’t quite figure out why the agent wants to show you some properties there? Not to worry – the Travel Corner is here to answer all (well, ok, most) of your questions.

Geographically, Anzio and Nettuno  are part of the agricultural and marshy areas (agro romano and agro pontina) south of Rome in the Region of Lazio, bordering the Tyrrenhian Sea. It takes about an hour driving south of Rome on the infamous Pontina – see earlier posts about this challenging piece of roadway –  but there are frequent trains from Rome, for those of you who prefer a calmer trip. The weather is much like Rome with the added attraction of sea breezes.

Like all of Italy, this area has an ancient tribal history. Much smaller than our Etruscan friends to the north, nevertheless the Volsci were a constant threat to Rome in the 4th and 3rd centuries BC, eventually being pretty much pacified and annexed by Rome by the 2nd century BC. The Volsci were farmers and traders, making good use of the excellent harbor at Anzio. Also, because of its seaside location, with mountains close by, this area was much favored by eminent Romans: both Gaius Marius and Cicero were born, and continued to maintain villas, in Antium (Anzio), as well as the Emporer Nero. Augustus Caesar spent much of his early life in nearby Velitrae (Velletri). So, with all of these notables, the area must had something going for it, right? 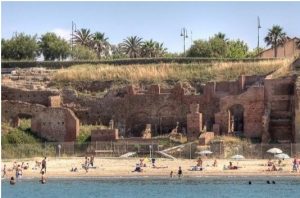 Moving along the historical timeline, Anzio/Nettuno do have some medieval connections. Because of the frequent Saracen raids in the area after the fall of the Roman empire, only Nettuno only survived this period. As usual, hereditary Roman families (many think that they were saracens as well) such as the Colonna and the Orsini established castles here reflecting their desire for extending their power. Remember them from north of Rome in Lazio? Never satisfied. Anzio and the port were rebuilt by the popes in the 17th century. During the Fascist era Anzio/Nettuno were administered as one city (as indeed it was when it was a Roman colony).

It has a checkered recent past that is for sure –in the 19th century, after being refurbished by the pope, and developed toward the East,  Anzio as an autonomous city attracted wealthy Romans, churchmen, and beach lovers. It was quite elegant. Very similar to ancient Roman times. This whole area was a fascist “social work in progress” during the 1920’s and 30’s, with populations from the north of Italy being moved wholesale to this spot (after they chased out all the mosquitos, that is), where they were given land and light manufacturing jobs. World War II of course totally changed its history, totally engulfed in the war machinery of three nations. However during the 1970’s there was yet another transformation in store for Anzio: essentially destroyed by the war, it was rebuilt, its urban core was expanded and upgraded, beaches improved, tourist economy developed, and its partnership with Nettuno revived.

So what does modern Anzio have to interest us?Nettuno also underwent a rebuilding program, and today the skyline is dotted with various large modern buildings and war memorials.(Really heavy on the memorials because of the terrible events). Although essentially one city administratively, Anzio and Nettuno each have their own historical centre, shopping areas, hotels, and restaurants. 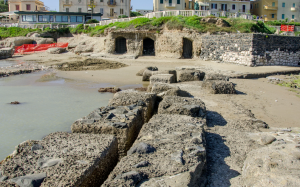 What’s good to see and do in Anzio and Nettuno?  Lets start with the roman ruins – we made note above of the famous Romans who were either born here or had posh houses nearabouts. So you can tramp through what’s left of Nero’s villa, surrounded by a grotto, as well as a roman amphitheater near Anzio. These ruins were actually built on the earlier site of the villa of Emporer Augustus. You can stroll through narrow, winding medieval streets in both cities; you can enjoy an evening walk along the sea on Lungomare Matteotti in Nettuno. Here is where you can find the great seafood bars and restaurants. Restaurants and bars here, as well as shopping, are not pricey, especially in comparison to Rome. Of course in this sea environment there is ample swimming and boating. Good food, enjoyable surroundings, moderate prices. How good is that? 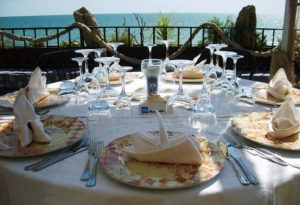 Naturally since we are in Italy, much of the construction over history is reflected in churches, Among the more interesting to look at is Sanctuary Maria Goretti  and Church St. Francis of Assisi founded in 1223! The largest memorial is in Nettuno – the American War Cemetery, really created as a huge botanical garden with all sorts of water designs and pools. It’s worth a look. Interested in trekking about? Nature reserves are plentiful, especially in and around the bluffs overlooking the sea. You can also find Volsci tombs carved into the rocks among the reserves. Now and again, the Italian movie industry does some shoots here so you might see some quasi rich and quasi famous, but…..don’t count on it.

So….what can I say…..for history lovers, sea lovers, bargain lovers, and for property dreamers, Anzio/Nettuno is a good spot. As usual, find yourself a great bar with a great view, and and enjoy the evening.

previousHEADING DOWN THE ETRUSCAN TRAIL
nextSURVIVAL INTERVIEW: an Australian couple who purchased a holiday home in Italy