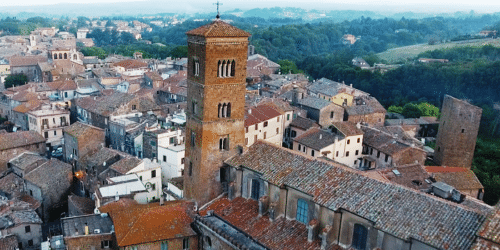 Comune di Sutri is a delightful, historic city in the region of Lazio, province of Viterbo. Strategically located at a prominent spot on the Roman consular road Via Cassia, it has controlled the entry to Etruria since the 4th century BCE. Eventually, the Romans vanquished the area’s ethnic tribes, including the powerful Etruscans, dominated the area and renamed the city Sutrium. Again, because of its location near to the Papal States’  city of Viterbo, Sutri figured in historical agreements between the Papacy and the Lombards, as well as being passed back and forth between the sides. There has been this constant struggle between ecclesiastical and secular authorities all the way down to the present time.

So, what is it like today? As it is a city which has survived history’s millennia, ancient architectural ruins can still be seen such as some remnants of the city walls, and ancient infrastructure such as stone sewers. From the medieval times the cathedral and its belltower remain, as well as the interesting church of Madonna del Parto, built on a base of a large Etruscan tomb. Nearby are the remains of a Mithraditian temple actually incorporated also into the basement of the church. The most striking ancient feature remaining in the area is the Roman amphitheatre just outside the city limits, almost completely intact.

The oldest residential and ecclesiastical structures are found in the center of Sutri. There have been some interesting renovations of these structures, providing modern housing for those who are interested in living in ancient environs. As you spread out from the center, the housing becomes more modern and newly built. As a result, the residential offerings can appeal to different tastes, as well as to the many tourists who frequent the area.

Geographically, Sutri lies in a volcanically active area, and so many hot springs dot the location. There are several well-known spas utilizing the hot springs. Additionally, in this area of Lazio you can find numerous sport facilities ranging from indoor gyms, indoor and outdoor tennis, hiking trails, and several excellent golf courses. Several lakes exist in ancient volcanic craters offering a wide array of water activities such as boating, swimming, and beach enjoyment.

Transportation to Sutri is basically by car – it lies just off Via Cassia bis, about a half hour from Rome. Otherwise the local trains can be useful – Rome to Viterbo and rent a car to Sutri.

For gourmets, between late August and early September, there is the Bean Festival, created to promote and the typical product of Sutri par excellence: the bean.

To all those who are looking for a few days between nature, history, art and taste, or dreaming to buy a property in Lazio, Sutri can offer all this and much more.

Find out more about our new listings in Sutri click here