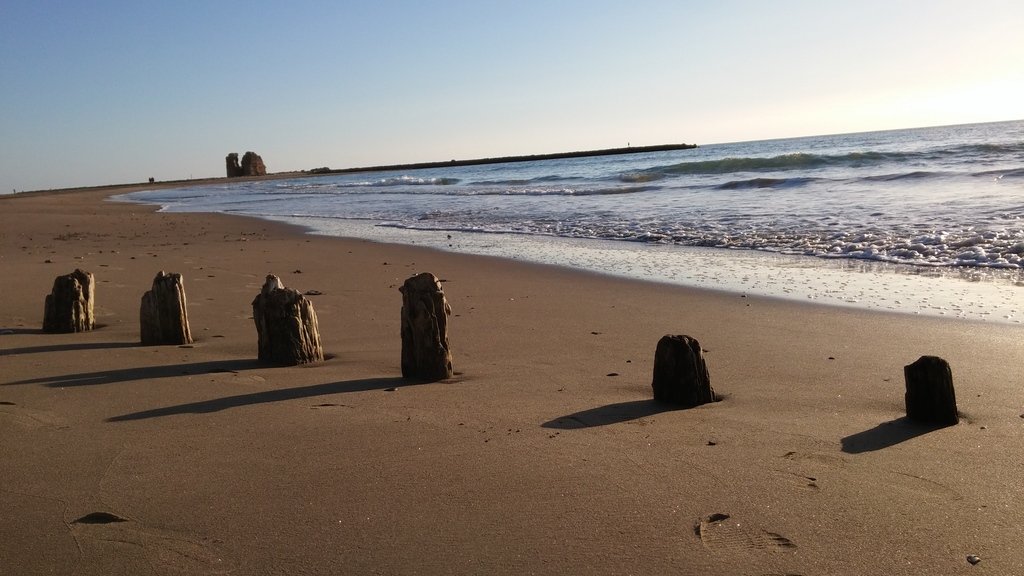 After our last post, reflecting on what the Region of Lazio has to offer to prospective real estate buyers, we are off again on our travels. Buckle up and get ready to uncover some facts about the mysterious ancient civilization of the Etruscans, why history knows them as “party animals”, (more about this later) where did they live, and where they do fit into the historical picture of Lazio. 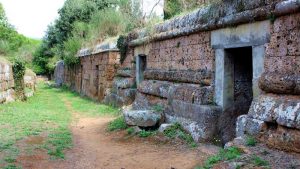 Etruscan civilization was at its height between the 8th and 5th century BC. They left little or no written records; their tombs, art works  and altars speak for them. As a whole, the Etruscans were spread between the Tyrrhenian Sea (in fact they were called Tyrrhenians by the ancient Greeks) and the Apennines Mountains, Tuscany on the north, Tiber and Arno Rivers – obviously a substantial portion of modern Italy. It was an agricultural, as well as a maritime economy, well known for natural resources of clay and metals which they skilfully used to produce artistic objects. An interesting fact about the Etruscans is that culturally they were not only defined by their artistic and intellectual  sensibilities, but by their love of the good life, music and wine.

Trading throughout the Mediterranean, the Etruscans were also famous for their intellectual achievements. Elites of many ancient Mediterranean nations sent their sons to be educated by the Etruscans. This tradition continued even after this civilization’s fall, when there were many Etruscan teachers and intellectuals found in Rome. Julius Caesar himself had an Etruscan tutor.  In fact as the Etruscans were gradually overwhelmed by the power of a growing Rome, they actually provided some of Rome’s earliest kings – the Tarquinian dynasty. 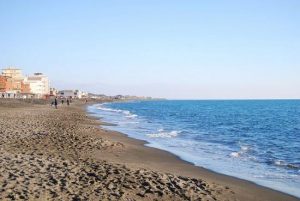 Etruscans preferred to build their cities on high bluffs, overlooking deep valleys, surrounded by stone walls. Although they were not a warlike people, this certainly made sense defensively. This was especially true of their eastern cities of Orvieto and Cortona – they can be seen from a long way off, standing strong on their heights. Here again, as we mentioned in earlier posts, geography influences everything. By and large, Etruscans lived in the mountains so naturally the design of their cities reflected that fact. On the other hand, while defensive in nature, Etruscan cities were also centers of learning and art. Schools and artistic workshops were quite prominent.

OK that’s interesting but …..you might say…where is this Etruscan Trail in Lazio? Some of the cities (two mentioned above) were indeed in the neighboring Region of Umbria, but north western Lazio also hosted  a good part of the civilization. We intend to examine two of Lazio’s Etruscan sites – Tarquinia and Cerveteri, located just north of Rome, close to the sea. 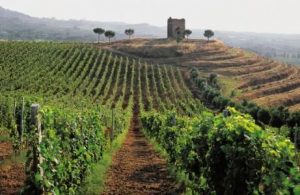 We can promise you that, contrary to driving south of Rome, both of these cities can be reached by a not-too-crazy modern Italian highway , so if you hold your nerve against the speeders (speed limit? What speed limit?) you can reach them in about 1.5 hours on the A12.

Alright, here we are in Tarquinia, (Tarchuna in Etruscan). Today’s population of about 16,000 is half of what it was at the height of Tarquinia’s  influence (30,000). However this city is a designated UNESCO heritage site because of the Etruscan treasures here and about. Mentioned above is the heritage of Etruscan art, Tarquinia was packed with artists of all sorts, so maybe we can refer to it as the Florence of ancient Italy.  Now, in the historic center, you will find the National Archeological Museum, housing artifacts, statues, ceramics, and frescoes from the necropolis tombs nearby. Actually it is from these frescoes that we gain an insight into the Etruscan civilization, great pictures of feasting, dancing, fishing, vinyards, good times. Looks like we found the party. They also give us a picture of work, architecture, burial customs and local food. Good times here, not at all like their eventual conquerors, the notoriously dour Romans. 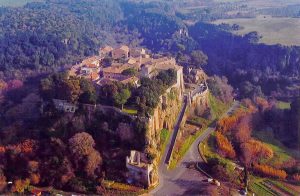 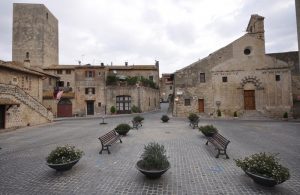 Now put on your walking shoes because our Etruscan Trail leads us a bit out of the city to the necropolis of Monterozzi, a wide expanse of chamber tombs, highly decorated with colorful scenes of Etruscan life. Here is where we find our view of Etruscan cultural history. Women feature prominently in these scenes, and interestingly enough, not only “in the kitchen” – they are working as artists, musicians, artisans, even as hunters: also interesting to note that many of the dancers in the scenes are men. So there you are – make of that what you will.

Just down the road is our second Etruscan city – Cerveteri. Yes, I admit it – I first saw this name on a bottle of wine. A supermarket variety of white, but just about the best supermarket wine you will find, dry and crisp, and…….the price is very, very modest (always a good thing). The label features a scene from one of tombs in Tarquinia so now you know the history of this wine. At any rate, back to our tour of the Lazio Etruscan Trail.

Again, taking the highway A12, it’s easy – stay on until exit for Cerveteri, modern name for Cisra. Cerveteri has a mixed historical reputation. The ancient Greeks valued its people for their sense of justice, BUT……the city was also known for its pirates. Figure that one out! Here as in other Etruscan cities, artistic and intellectual pursuits were very important. So there are remnants of schools and artistic workshops as usual. 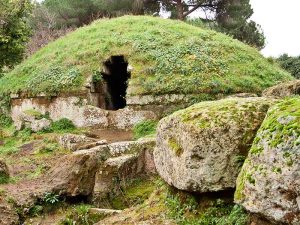 What we are looking for here is the necropolis on the outskirts of town. So here we are, more tombs,(oh please, no no stay with me here) actually many more – hundreds in fact. Resembles an open air art and cultural exhibit. But you see that is the way we can appreciate the Etruscans. The major necropolis here is called Banditaccia and is considered to be the finest of the Etruscan sites. There is even a tomb of a couple, featuring them sitting in each other’s arms smiling broadly. This is my favorite! What attracts me is their secret “couple” grin. See I told you the Etruscans were really interesting.  In and around the necropolis they have also excavated a tufa road which was used to connect the site to the city. It is still the best way to get to and fro. 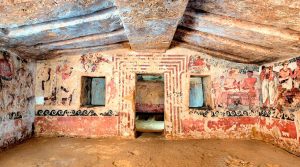 Both Tarquinia and Cerveteri have very good small restaurants in which to enjoy the food particular to the area. Nothing fancy, just robust country food, meat, vegetables, and of course that great white wine. While these cities are all about archeology, stop in, have lunch or dinner, check out the local shops, and especially the museums. This is really getting to know a city and a civilization.

Enjoy, and celebrate the wonderful culture of the Etruscans.

previousTHIS IS NOT A TRAVEL GUIDE. PAUSE#1
nextAnzio and Nettuno