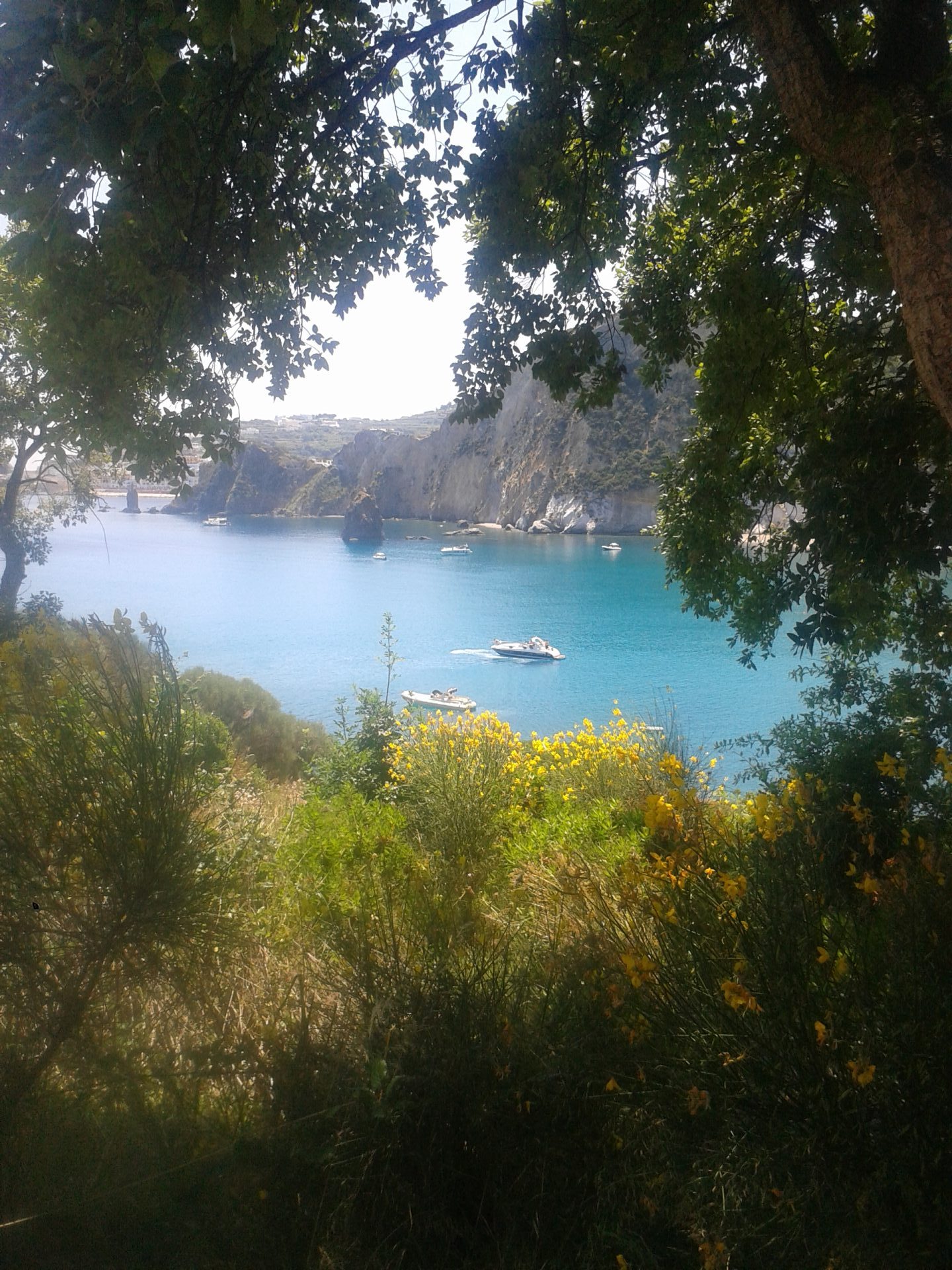 We have worked up a “two-fer” for you – two localities, one trip. Jumping into our car (ok – carbon footprint and all that; use of which will be explained later)  and heading south from Rome, we’ll be driving down the Pontina (highway 148) due south to San Felice Circeo, one of the best known beach towns between Rome and Naples. Hope you have your summer wearables with you because at this time of early summer, it can be pretty hot down south, but it’s only about an hour and a half drive, and the further south we go, the closer to the shore we are. So…….nice offshore breezes. Our second destination  will be the island of Ponza, just off the coast of Circeo. We have treated them as one because this is one geographical and historical area. Check out our subsequent publication in two weeks for Ponza.

It’s really a lot easier and faster to drive this route, although there are trains which can get you fairly close, very slowly. The Pontina is a challenging drive, but it is direct. It is not a drive for the faint of heart since it is basically a two lane road which, as always, Italians make into about 3 and a half lanes. Here’s the thing – just keep to the right, don’t try to keep up with the crazies, always take the second turn at the roundabouts,  and you will be fine. The route takes you through the pontine marshes area, a mosquito-ridden place which Mussolini had drained, made safely habitable, and distributed to the lower economic classes as individual plots of land. You can see the squares of land and the straight roads dividing the blocks most of the way south. Yes, this is still Lazio, even though our earlier escapades took us to the north-east of Rome. Going south you pass through Latina, the last major town on our route. And Anzio, site of the WWII landing of American soldiers. Gradually the increasing prominence of the sea and beach is noticeable – just look at all those souvenir shops, with flippies and hats! At last, at one of the interminable roundabouts, there is the sign for Circeo.

Circeo is like many a beach town in this area, a mix of archeology, seaside residences of various types, beaches, and great nature reserves and national parks. Its attractions are nature, beaches, Roman ruins, Greek myths, water activities, and, of course, terrific fresh seafood. Sorry shopaholics – other than beach attire, this probably will not be a good spot.

First a bit of history. As you may have noticed from the name, this region was the location of one of Ulysses’ adventures – the charms of Circe, but, long before that, they have found evidence of human settlements from 50,000 years ago. So, folks, this is really, really old. As all of the towns along this coast, the ancient Romans used it as a summer get-away, just like today, and there are many ruins to tramp through and grottos to explore. Emperors Domitian and Tiberias enjoyed the sea breezes here in their villas. Much later on, the Roman cultural and intellectual elites moved into more modern villas here, including the author Alberto Moravia and film director and author Pasolini (we met him before in an earlier blog). It seems then that the “beautiful people” of whatever generation  hung out in and near Circeo. 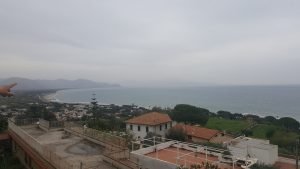 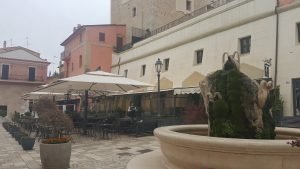 Now, what to do when you arrive – Circeo is really all about nature in its seaside forms. Mount Circeo looms over the town from its promontory, providing great hiking and ruin tramping through the forests. This is the actual place connected with the Circe legend – sailors rounding the promontory being enticed. Also there are remnants of the Etruscan Volsci’s and a Roman fortress. Middle Ages saw the Saracens, the Spanish, and the Papacy battling it out here. Certainly a well-used piece of ground! The best swimming and boating is in and around the many grottos and underwater caves on the shore, some dating to Neanderthal times. There are many short boat trips available to close spots on the coast which feature these grottos, such as Assurra, Fossellone. 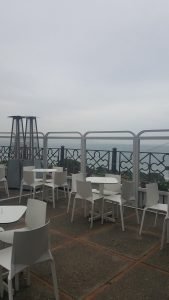 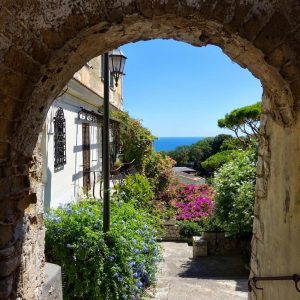 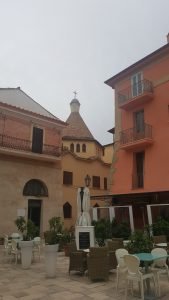 The town of Circeo itself has a walled medieval sector as well as a seaside zone. Good beach, archways, of course a piazza are features; local restaurants feature the local seafood which is fresh locally, usually caught that day, restaurants are low key and fairly moderately priced. An interesting feature of the area are the residences which are set, and sometimes carved, into the rocks of the mountain. Dating from the 60’s, they are uniquely designed – certainly not your usual beach bungalow. After a day of sightseeing, there is no shortage of bars and small restaurants featuring a fantastic view of the sea and the sunset. Unbeatable. 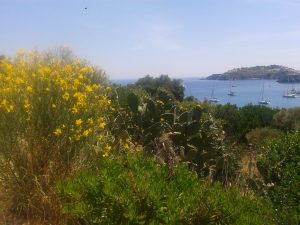 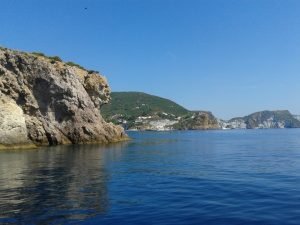 Just to remind you we are down south of Rome in San Felice Circeo, in the heart of Tyrrenian Sea beach country. Our car trip from Rome has taken us through Latina, and notably past Sabaudia, another beach town which Mussolini built especially for the workers which, as you may recall in our earlier blog, were housed in the area. We have passed the Pontine Marshes area, and have made our way toward Circeo right on the coast.

Now, we can look seaward from Circeo and spot the shadowy outlines of the Pontine Islands of Palmarola, Zanone and, (best known) Ponza. These islands are remnants of the rim of an ancient volcano, so Ponza has mostly rocky shores and many natural rock bridges. Ponza is crescent shaped, its main harbor is large and welcoming; during the summer this island is all about private boats, attracting wealthy Italians, mostly Romans, to its shores. 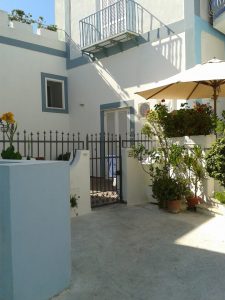 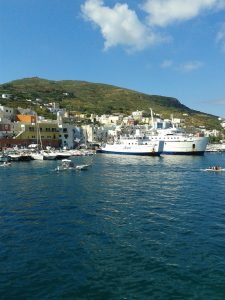 Reachable by train or car from Rome, and then by ferry or hydrofoil from Anzio or Formia, direct hydrofoil from Naples, but hey! We are in Circeo already, and guess what? There is a direct ferry from Circeo to Ponza.

The history of this area is quite similar to Circeo and environs – first colonized by Etruscans, who made use of the fine lumber of giant trees and terraced the land for agriculture. The trees are gone now but the terraces can still be seen, although not in use. The legend of Circe is alive and well here as well as on the mainland. In Roman times the island was a place of exile (Caligula and Nero both made use of it to send family members away; still remaining is a villa from that time. Ponza was abandoned during the middle ages, and became a bystander to wars with Spain, France, England. During the fascist era once again the island was used as a place of exile for political dissidents. Post war it has become a very popular attraction especially with Italians.

Ok, so much for the history, lets get down to the island’s attractions. Since it is so rocky, there is really only one sand beach on Ponza – the rest are volcanic stones and rocks. Reachable only by boat, visitors need to take a water taxi from the main harbor to the sandy beach of Chiaia di Luna, or others like Frontone or Tirreno beach. There are also natural pools amidst the grottos in which to swim. Kind of like an Italian movie set. The Pilato Grotto is a cavern from roman times, partly submerged and a challenging swim for those divers among you. Ponza has a lovely botanical garden featuring tropical plants and water plants. 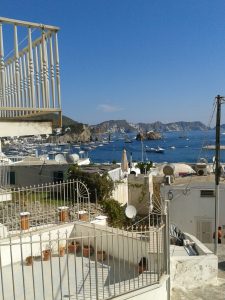 What is there after the history and natural beauties? Of course, this is Italy – the food. Seafood, seafood and some pasta, and more seafood. Fresh from the sea, still alive when it arrives at port. The taste must be experienced. Someone told me when I asked about what to do there,” hang out, eat, people watch, long walks, lie on the beach, drink. Not necessarily in that order”. As always, we sign off with the suggestion – after your “busy” day of exploration, find a bar with the best possible view at sunset, and ENJOY

previousBomarzo – oh yes, I remember seeing something about a monster park in the middle of Lazio. This picture is Bomarzo?
nextTHIS IS NOT A TRAVEL GUIDE. PAUSE#1