Yes, this is Bomarzo, a small town perched on the hillside in Lazio, about halfway between Orte and Civitavecchia, just off the E35 highway. Checking out the map of this area of Lazio, you can see the proximity of  these hill towns. Of course you are perfectly situated for day trips into Tuscany – Florence, Sienna, and Marche. Again capped by an Orsini Castle (you really get an idea of the one-time power of this family. This is to show you that there is more to Bomarzo than the “monster park”, and, more importantly, to encourage a visit to all of it. 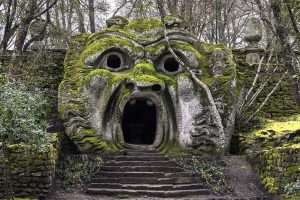 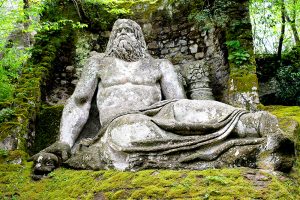 We’ll start with the most obvious visual image – the Palazzo Orsini, the family name a familiar one in this area – it appears as if they owned mostly everything hereabouts. Anyway, the Renaissance architecture combines with local characteristics to become the focal point of the historic center of the city. A project arising from the second marriage of the Duke Orsini in 1520, it grew in pieces, (kind of like the Duke’s marital history) with various contractors, architects, sculptors and painters. A new road was built providing access within the cramped center, and a spectacular terraced garden provided a view from the palazzo to that road. Private Orsini family quarters were completed in 1544 following the Duke’s third marriage (he was active!). With the engagement of artistic experts from Florence, and considering the extended timeline completion, the entire palazzo reads like an artistic roadmap of 16th century Italy. It’s open saturday, sunday, and holidays from March to December. Have a look – really, it’s well worth it. 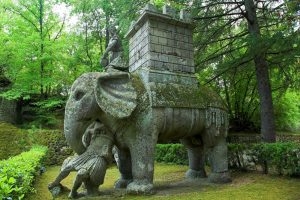 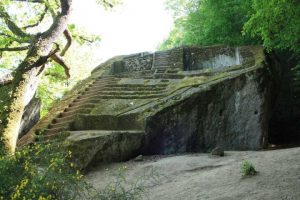 Other architecture scattered about the town are, as you might expect, churches of various designs, ranging from romanesque(San Anselmo) to classic, complete with pillars, (Santa Maria della Valle). Again, these are small architectural gems, with interesting interior frescos. An added attraction here is that if you are visiting in the warm weather, the church interiors are naturally cool. 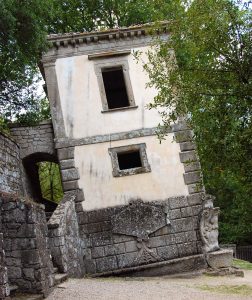 All right, moving outside in Bomarzo and taking in some ancient architecture remaining from a disputed source around the 6th century BC, a pyramid presents an interesting sight. Located on a hiking trail not far from the center of Bomarzo, the trail heads downward (that is good news) giving a wonderful view of the valley, where there are human shaped tombs. Take the left fork in the road and there the pyramid stands on an enormous rock with several steps carved leading to an altar. Its origins are disputed, some say Etruscan, some say Rinaldone culture. At any rate, its use as an sacrificial altar is clear, as well as an astronomical observatory. The ruins are still under excavation, so for more information about this mystery, stay tuned. 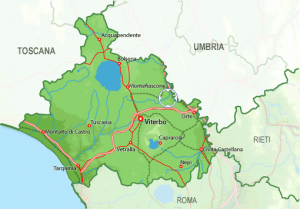 Also in the area of this hiking trail is the Nature Reserve of Monte Casoli, about 5 km from Bomarzo.  It’s a beautiful area with woodlands and plateaus, as well as  many archaeological sites from the Etruscan, Roman and medieval periods. There is a visitors center to help you get oriented and direct you to the touring area. You can see that there are plenty of things to occupy the outdoor lovers (and the historians) among you.

Now for what you have been waiting for – the Park of Monsters. We put it last so you would see all the valuable sights in Bomarzo before the park. Usually considered the town’s main attraction (I have to differ with that), the park is named after the huge free standing and embedded rock sculptures scattered about the garden. Again the brainchild of Duke Orsini, after the death of one of his wives, his idea was to shock or astonish. Designs range from an elephant tearing apart a roman legionary to a sphinx, to a larger than life head with an enormous mouth (inside of which you can picnic) to a tilted house, many with mysterious latin inscriptions. Some historians think that this garden was meant as a counterweight to the perfectly symmetrical, nearby Farnese garden at Caprarola. Monster Park’s surreal nature attracted surrealists such as filmmaker Cocteau and artist Dali.

For your midday or early evening meal, the local restaurants are all recommendable, Mostly informal they feature the food typical of the area and a country décor. Do try them to round out your visit to Bomarzo fully immersed in the ambience of the locality.

previousSoriano nel Cimino
nextSan Felice Circeo and Ponza…Ready for our next adventure into scouting out possible areas where your dream house may appear?

Comune di Sutri is a delightful, historic city in the region of Lazio, province of Viterbo. Strategically located at a prominent spot on the Roman consular road Via Cassia, it has controlled the entry...
Read more
June 25, 2020

In the heart of the green Sabine Hills, among thick woods and olive groves, the small village of Poggio Catino stands alone on a hill. The inhabited area is located on the southwestern foothills of...
Read more

We use cookies to ensure that we give you the best experience on our website. If you continue to use this site we will assume that you are happy with it.OkRead more