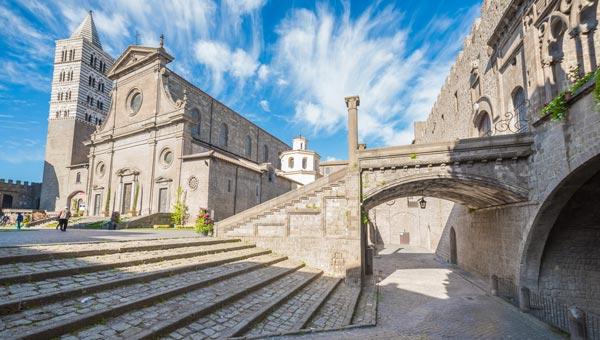 Judging by its architecture and monuments, Viterbo comes at us straight out of medieval times. Much of its medieval historical center remains intact, palaces and fountains everywhere, and the ubiquitous presence of the Catholic Church is pretty hard to ignore, even in Italy. In fact it is called the City of Popes because the papacy actually resided here for 20 years in the 13th century; in the years before medieval times, sometimes known as the Dark Ages (700-1200), Viterbo was the long suffering (hundreds of years) site of the murky politics and wars of the disintegrating “Holy Roman” (by now only feuding German warlords)Empire. Very little if anything left indicating an historic important identity as an ancient cultural center. 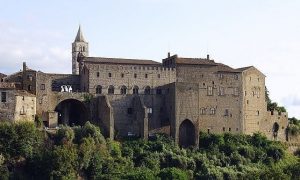 But……wait a minute! Isn’t Viterbo located right in the heart of Etruscan country? (see our blog On the Etruscan Trail) Just a hop,skip and a jump north of its famous neighbor Rome; ground zero for tourists searching for those Etruscan tombs, not to mention the nearby seashore, or bewildered foreign drivers who blundered here on the way to Rome from the airport.  Yes indeed it is, so……what about that long-ago part of its history. Well the truth is that the only record of it being an important center for the Etruscans, or indeed for the Romans, comes to us tainted, that is  —-fabricated, puffed-up, “fictive” (Isn’t that a great word?) Who created this falsehood?

Ever hear of Annio da Viterbo? No? OK, don’t worry, very few have – I ran across it as I was preparing this blog on Viterbo. He was a 15th century priest who set himself up as the expert on all things historic, claiming, among other things, that not only did he know many Oriental languages, but also that he was an archeological superstar. The historians and intellectuals at the time in Viterbo (including several Popes) thought that the work of this charlatan was just what they needed to build up the area’s reputation, a bit of publicity you could say. His writings were voluminous, he had an important job at the Vatican in Rome, his maps were inaccurate at best, and he was even caught “seeding” an archeological dig with fake ancient Etruscan and Roman statues. At any rate, substantial ancient historical connections with the Etruscans, not to mention the Romans, were disavowed. Turns out Viterbo was a not-too-important Etruscan village and a backwater on the via Cassia on the way to Rome. Sorry Viterbese! Maybe Annio could be called a medieval propagandist and Fake-newser, quite successful however in convincing others of his own worth, at least for a time. You see —nothing new under the sun!

Today, Viterbo is the capital city of the Province of Viterbo in west central Italy. About an hour north of Rome,  its population of 67,000 is substantial for a medium-sized city. Known for its thermal springs, ceramics, and of course hearty country cuisine, well-connected  by highways, railways and a major international airport in its own right, in recent times it also continues to serve as a bedroom community for Rome-bound commuters. 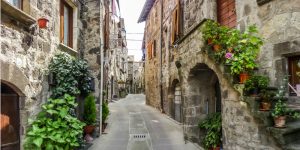 Now let’s look at what can be of interest to us in present-day Viterbo, as we take the train from Rome for a day or a weekend. 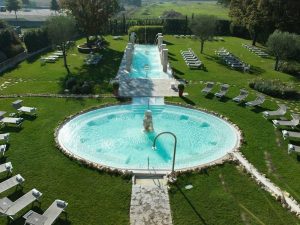 Among the Italians, Viterbo’s natural hot springs are renowned. Even the ancient Etruscans and Romans used to journey here for the therapeutic effects. The most famous hot springs resort is Terme dei Papi (Bath of the Popes) which has both indoor and outdoor pools, but there are other smaller ones, like Bullicame and Bagnaccio, some of which are free for use. These springs are nature’s hot tubs – if you are in the area you should try them out; bad back, sore muscles, whatever – they just make you feel good. 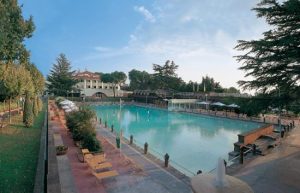 There is much to appreciate in the medieval design and architecture of Viterbo. First to notice is the Palazzo dei Papi in the main piazza. Identified by its loggia (series of columns and arches) (symbolic of justice and government in the Middle Ages), part protective fort and center of papal activity in the 13th century. You can tour through its wooden-ceilinged rooms and enjoy the hill-top view from the balconies. Next to the Papal Palace is the Duomo San Lorenzo (in Italy every city has its duomo, some more important than others!) , and considered a part of the Papal Palace. Sparse in design,  although having a lovely rose window,  built over a temple dedicated to Hercules (another vague Etruscan reference) it remains an example of early church architecture, before the explosion of renaissance decoration. Well worth a look. The organist frequently practices in the late afternoon, so you may get a free concert as well. 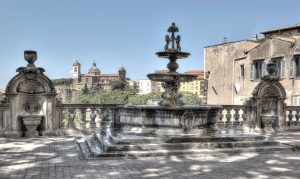 The neighborhood of San Pellegrino (no, they don’t produce the water here) will satisfy all you walkers and wanderers. It is one of the few intact medieval neighborhoods in Italy, where you can stroll about and just take in the sights. Look for the profferli, outside staircases on the houses. Think of them as medieval fire escapes, but since the houses are stone, who knows how far a fire will get. At any rate, better to be safe. Actually, initially they gave access to the first floor living quarters of the house, the lower level being used for shops. Winding alleyways, unusual piazzas, camera-friendly hidden corners, 13th century fountains –  it’s a great way to scope out choices on the way to your dinner.

You may be interested in discovering the two levels of Viterbo. There is an elevator off the parking area on via Faul connecting the levels. Watch out for that very weird sculpture rising out of the park near your car. The lower level encompasses the historic center, while the upper level features the Papal Palace, the Duomo and major other palaces. Viterbo is also a city of tunnels especially in the historic city center connecting some of the houses; they are used now as cellars.  You will find these cellars and tunnels in some other smaller towns in the area of Lazio. (see also our blog on Soriano nel Cimino).

Now for the good part – the food. Viterbo features the typical food of this area of Lazio as well as the particular wines, especially whites. The food is basically country-local based, featuring many types of vegetables, lentils, chick peas, chestnuts, and nuts used in delicious soups and stews.

Of course dishes using wild boar and more conventional forms of pork and chopped meats are served, usually with wide forms of egg pasta. For the nutella lovers among you, the Viterbese make a form of that product called Nutellina, chocolate and hazelnut spread. Oh wow, how will we keep our shape with these treats.

In sum, for those who follow us with perhaps some Italian real estate in the Province of Lazio in mind, Viterbo is vitally important to the smaller towns in the area, providing schools, work opportunities, theatre, music, shopping and transport connections to the rest of Italy. It features much lower cost of living than Rome to the south while still providing a larger city atmosphere. So really, it has it all. Why not check it out for a weekend?

previousPlanning to buy a property in Italy?How can we help you?
nextPAUSA #3 – HOW CAN WE BUY YOU – LET US COUNT THE STEPS